In mid-February 1643, the Marquis of Newcastle, marching south from Hexham on his way to take back Richmond from the Parliamentarians was met by the Fairfaxes on a defensive position on a bare hillside near the village of Barningham.  The Fairfaxes were slightly outnumbered, but felt that the combination of more Horse and a good defensive position would be enough to hold off the Royalist army... 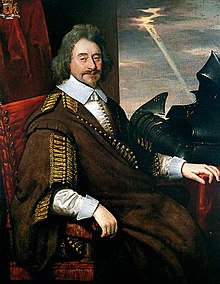 Game Results:
A decisive Royalist victory this, only slightly spoiled by the number of routing troopers that the Fairfaxes managed to rally after the battle - thus the Parliamentary casualties look abnormally light for the size of the defeat.

Game Notes:
A very exciting game this, that could have gone either way - but enough things broke well for the Royalists and their plan turned out to be better.  I think the main bit of luck was the flanking Royalist foot beating off the charge of Fairfax's reserve Horse: that really could have gone either way, and might have stabilized the centre.  I didn't feel I encountered any "mechanical" issues with the rules at all, but I continued to use my modifications which allows firepower to be a little more effective.  When everything gels, these rules do give a good game.
My recent investigations into cavalry tactics paid off and I felt a lot more confident using both sides's Horse to best effect.  Most of the charges worked to a greater or lesser extent, as did the advances to contact when they were most appropriate.  I think that I can offer a further insight, too: the best distance to hold off Swedish-trained cavalry is 3BW.  This tempts the cavalry to charge but if this opportunity is refused and the cavalry merely advances, it allows the other side to just advance to contact with the mild bonus that entails.

Figures as ever by Baccus 6mm.

*From 1643, I have started allowing the Royalists more muskets.  Although in the north, I would guess there is an argument for having all the armies more mixed pike:shot.  I await the comments and corrections of those more knowledgeable than me.
** The King's War game rates Ferdinando Fairfax as a good officer but a poor army commander.
*** From previous comments, I have rated Fairfax's Horse as Swedish-trained rather than Dutch-trained, to allow them the option of charging at the gallop.
Posted by JWH at 15:41