Campaign Battle 24: The Battle of Villoria

The Battle of Villoria, late July 1809

General Situation: In a bid to increase the pressure even further upon the hapless King Joseph, Wellington has conducted a bold forced march past the French forces concentrated around Salamanca to strike the slightly isolated French I Corps.  Alarmed, King Joseph has set all of his troops in motion to succour Suchet's I Corps - and if Suchet can just hold on long enough, then perhaps superior force can even be brought onto Wellington's left flank and changing the complexion of the campaign entirely...

Although the margin of Allied over Imperial strength was quite small, the Imperials would not have all their available strength at the beginning of the battle.


Outcome: A true disaster for the French.  Wellington's forces were just too strong for Suchet's isolated corps and ripped it apart before any of the French reinforcements reached the scene.  They arrived too late and then became the focus of vicious attacks which destroyed three French formations in the space of an hour.  Allied losses were trifling - about 800, roughly evenly split between the British infantry and the cavalry.  French losses were very high however: c.12100 infantry casualties (including 7500 prisoners), 2000 cavalry casualties (including c.1000 prisoners) and 12 guns lost.  The retreating French troops were bundled back in to Salamanca.

Game Notes: A trifle disappointing as a game because the Allies proved just too strong: too strong numerically for Suchet's Corps, then too strong in quality for Moncey's motley corps.  The French had little luck, starting with the very poor terrain rolls in the first place.  Without firm anchors for the position, Suchet's force was always in for a very hard time.  Combat outcome and morale rolls continued to play a key roll in the game: the early departure of Ruffin's division (only a 1-in-3 chance) really set the dismal tone for the French battle.  The British cavalry success allowed it to reform and cause the huge casualties in the nearly encircled French infantry formations. 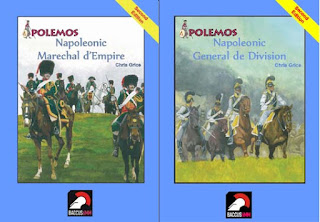 The game was played using the Polemos Marechal de l'Empire rules on a 5'x3' table over a homemade terrain mat.  Figures as ever from Baccus 6mm.  The game took about 2 hours to play to completion.