I played through a game of Nuts! properly for the first time today.  I have Nuts! version 2 rather than the final edition, unfortunately: 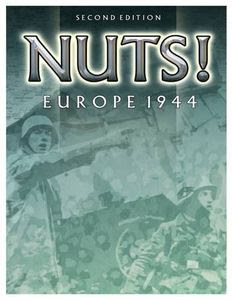 This game deals with WW2 skirmish combat, covering everything from a group of a few men up to a couple of platoons and a few vehicles.  It uses the famed Two Hour Wargames reaction system, which is ideal for solo and co-operative play (although nothing I saw makes me think this wouldn't work well as a face-to-face game).

The basic mechanics of the game are REP (reputation, i.e. skill level) and reaction tests (normally 2D6 vs. REP) in a variety of situations which determines the actions of troops.  The way the game seems to work by a player carrying out an action, which may or may not lead to numerous subsequent reactions.  All of this chain of reactions is executed before the next deliberate move is made.  The principle is pretty simple.  One interesting design choice is to make sure that each exchange of fire has to finish (even if simply by one party ducking out of sight) before beginning the next set of reactions or actions.
The reaction tests are all the kind of things you would expect and take into account suppression and morale and so on.  The weapons values at first glance all seem reasonable.
Although I was very pleased with the game and I am looking to explore it much further, the person I really want to recommend it to is my 13-year old self: he would have just loved this game!
Anyway, I played the simple introductory scenario within the rules and had a very enjoyable quick game:

Game Notes:
I didn't encounter any particular problems with this game.  The only slight doubt I had was how cover and concealment worked.  The scenario notes stated that the allies started 2cm into the woods and that the two Germans outside of the house should take an in-sight test.  I deduced from this that troops can "see" 12cm into the woods.  So the Brits had to work quite far around the flank to avoid being seen from the house. This is a little different from typical skirmish rules. But overall, it was all pretty intuitive.
One crucial point is that there are a number of rules which make the game slightly more "movie" - basically the rules have "stars" who can cheat death and behave more heroically at will.  If I hadn't played with these rules then the Brit Corporal would have lost the firefight and the result of the encounter would have been the reverse.  But I can see that the rules would work equally well - although with a slightly different feel - if one just ignored these special powers.
For this test, I used 6mm figures on a 36cm x 36cm playing area(!), with measurments changed from inches into centimetres.  It worked fine.  Figures were a mixture of German GHQ 6mm and Baccus 6mm Brits, as is the building.  It took about 30 minutes to play, I think, but over half of that was me checking the rules.  I'd imagine this little vignette could be played out in less than 10 minutes once I am more familiar with the systems.