I have had Cold War Moderns on my to-game list for quite a while.  A little while ago I bought a few figures (a Soviet Motor Rifle platoon and an Australian Mechanised Infantry platoon) to paint them up as a test, and I am quite pleased with how they came out.

As it happens, the conventional "Cold War Gone Hot" does appeal, especially in 6mm, but not as much as the Twilight 2000 aftermath, particularly for 15mm skirmish gaming since it rules out the and everyone died when someone chucked a bucket of sunshine over them scenario.

Twilight 2000 is available at Drive Thru RPG (both editions, with all the adventure and supplement packs). 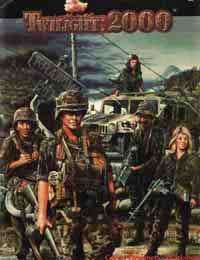 I had a look through both versions of Twilight 2000 to work out what kind of forces one might need, assuming that one did not change the initial premise that the characters were part of an American division (although were not necessarily American themselves) that has just been overrun in Poland.  I think the force levels one would need are something like the following:

Ideally there would also be some Polish troops and some rougher-looking marauders and stragglers too.


In addition, there should be a smattering of Western stuff for the PCs and any other Western troops they happen to encounter.  Of course, there is nothing in the material to stop the entire party being from Soviet nations, equally desperate to get home.

Irregular Miniatures:
Irregular miniatures does a range of 1990s US Infantry and some some 1980s Soviet Infantry and Afghan Mujihadeen.  It also does some useful rioters armed with clubs and so on.  These are sold individually (£0.44/fig).

CP Models:
CP Models has a small but useful range of 15mm modern stuff, including some mercenaries and 'generic' troops which come in packs of 5-6 figures (£0.50-0.60/fig).

Quick Reaction Force:
QRF has a very large range of suitable figures and vehicles. Vehicles are in the £3.50 (very small) to £6.50 bracket (although it does have some really big B echelon vehicles which are understandably more pricy), figures come in packs of 8. (£0.34/fig).

Peter Pig:
Peter Pig has lots of relevant stuff in its AK-47 and Vietnam ranges, mainly figures but has some key vehicles as well.  Vehicles are £4 (UAZ-469, Toyota) to £8 (Centurions, big trucks).  The figures have some useful stuff that I don't think there is anywhere else (Female militia etc.) and come in packs of 8 (£0.44/fig).

Battlefront:
Has a huge selection of stuff in its Team Yankee range.  Vehicles seem to work out at about £5-6 per model, £10 per helicopter, but they are typically sold in boxes of 3-5, so aren't quite as useful for the small battle gamer.  However, the most popular stuff is sold as individual sprues too, which are typically £5.20/vehicle.*  The infantry are sold in platoon packs, varying from c.25-c.50 figures each.  I think that the metal figures work out as between £0.34/fig and £0.44/fig, whereas the plastic figures are c.£0.25/figure (I could be very slightly wrong because it isn't always 100% clear to me exactly how many figures are in each pack).

Old Glory:
Old Glory has a range of modern infantry and vehicles which looks mainly geared towards the fighting in the Middle and Near East over the last two decades, but would definitely be useful for Cold War/Twilight 2000 type stuff: in particular the pack of Armed Civilians in western civilian clothing looks ideal.  Figures are sold in packs of 50 (£0.32/fig) and vehicles are typically £6-8, sold in packs of two or three.

Mick Yarrow Miniatures:
I don't think I have ever seen these in the flesh or online; apparently they were at Vapnartak this year but I can't actually remember seeing the stall.  Anyway, they do a small range of modern stuff with US infantry and various European and Arab irregulars and rioters.  Sold in packs of 8 (£0.28/fig).

MJ Figures:
MJ Figures have a  Falklands range and a small Modern range, figures £0.30ea. (some sold individually, some in packs of 10), with a couple of vehicles too £3-6.

The Scene:
The Scene has some slightly unusual ranges that would be of use, especially for militia, marauders and special forces types.  Some figures are sold in packs of 10, some in 6, some individually.  Prices seem to vary from £0.39/fig - £0.50/fig.

Other Stuff:
I know that Khurusan Miniatures, Rebel Minis and Flashpoint Miniatures all do useful ranges but as far as I am aware, none have a UK distributor currently.  I don't include shipping costs for the other ranges since most can be obtained at shows or at FLGS shops, so there isn't an easy way of doing it, but if there are any fans of these ranges in the UK who can give an idea of how much their stuff actually costs per figure and vehicle, I will happily add this on.

Comments:
I am not going to make any comments about the aesthetic quality of any of the ranges since that is such a personal matter.  For price, the Plastic Soldier Company takes some beating for its Soviet infantry.  I think the only way not buying them makes sense is if a - you really don't like the figures or b - you want to keep the model count very low and just have a core of say two-dozen Soviet infantry and then everything else is an optional extra.  The alternative here might be to buy the Battlefront Motor Rifle platoon and then add stuff, but depending on what you add, it might end up more expensive anyway.  The Old Glory, Mick Yarrow and The Scene ranges look quite good for adding the marauders and stragglers that play such a big part in the Twilight 2000 world, although the Peter Pig ranges could work in many cases too.  It might be worth getting some codes from QRF and Oddzial Osmy for the specifically Polish troops.  To save a bit, Soviets could be used to bulk out Polish units as long as they were in the minority.
The models needed for the PCs (assuming the PCs are from NATO countries) and Western forces generally will depend a lot on how big you want to make them.  If the assumption is that the PCs are a very small group and are only going to meet other small groups of NATO troops (or marauder groups based on NATO forces) then there is an obvious advantage in buying smaller packs or individual figures.  This will also depend on whether you want to just say that all "NATO" troops are in US, or German, or Canadian or whatever uniforms, or you want to make the distinction between them.