I have really felt up for doing some more WW2 gaming recently.  I have been doing a lot of tidying up of my WW2 stuff to enable this, in both 6mm and 15mm, and I think that I may have three or four more days to go in doing this (although I can't help but be tempted with getting just a bit more stuff...!).  But I find all preparing/no gaming a very dull way to proceed, so I set up a small 15mm skirimish game, with the specific aim of trying some of the rules I have that I don't play very often.  I am still working on the full AAR of the first game, so possible more of that later, but for the second game I used Five Men at Kursk, the most recent WW2 offering from Nordic Weasel. 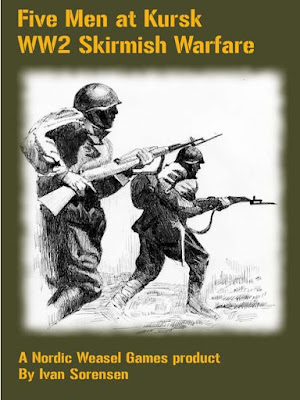 Situation: The survivors of a platoon from 9 Durham Light Infantry have become separated from the main body of their battalion.  They are retreating North, hoping to find their battalion before they are rounded up by German tanks or Panzergrenadiers.

Objective: The British section must exit the board on the top-right hand corner.


Game Notes:
A good fun game, even if it quickly went very wrong for the British at the end!  My ten-year old was rolling for the British and has learnt a valuable lesson about the fickleness of a wargamer's dice - the German rifleman by the bridge was just unstoppable!!!
Although it is early days for me with this system, I liked it.  It was quite like Nuts! in many ways.  How to put this?  If one thinks of a rule mechanic as a condition (at what point you make a decision and/or roll a die/pick up a card etc.) and a resolution (how you resolve that condition, by throwing x amount of dice, playing rock-paper-scissors, whatever), then the condition part of the mechanics is very similar to Nuts! but, the dice mechanics of resolution are very different.  So for example, Nuts! and FMaK both have a die roll activation system, but in Nuts! one die is rolled and this indicates who can activate; in FMaK a number of dice are rolled and these are assigned to individual soldiers or groups.  Both rules have an action-reaction mechanic embedded with an IGOUGO system, but use different terms (ducked back/hunkered down vs. nervous/scared) for similar, but not the same, game effects.  I am pretty happy with Nuts! in general, although I think that I found FMaK a bit easier to pick up straight off.  I am not quite sure why this is...I think it is probably to do with the fact that Nuts! is definitely easier to play with fewer figures because of the way the sighting and reaction mechanisms work and interact, whereas (within reason) it shouldn't actually matter in FMaK.  But this needs more consideration.

Figures are a combination of Battlefront and Plastic Soldier Company (for late war rather than earlywar, but that isn't going to stop me setting scenarios in 1940!).

Incidentally, I found a very useful You Tube playthrough of Five Men at Kursk here: