As a tribute to Just Jack's blog and frankly to scratch a real itch to get some WW2 games played, I hope that he won't be offended that I have (again!) stolen borrowed a scenario that really appealed.  As a small mitigation of this, this was also in the interests of ludological science: although we are both interested in many of the same periods and elements of warfare, we tend to favour different rulesets: rather than using a modified version of Chain of Command, I wanted to see how the scenario would play out using one of my favoured rulesets for company-level WW2 combat: the venerable WW2 1925-2950 Armour and Infantry set. 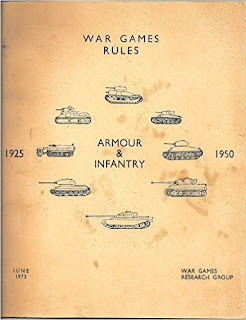 Just Jack's original game is here, so I won't repeat all the details.  The game is basically a German advance against a junction held by a very scratch Commonwealth force.

My figures are really for Northwest Europe 1944-45 rather than the Med in 1941, so a certain amount of proxying and squinting is required, particularly for the AFVs.  The Stugs are considered to have short 75mm guns, the Commonwealth armoured cars to be of an early war type (I should actually work out what they really would have been).

I did consider giving the RE platoon a -1 to reaction tests but decided against it, partly since they are going to be up against it anyway, partly because it is arguable in these conditions whether a -1 pip on the die is too severe a penalty.

KG Klink and Tomforce will follow the plan in Just Jack's original battle and I will only change their orders in reaction to subsequent events.

Game Notes:
A very enjoyable game and scenario and not in the end differing too much from the result in Jack's original.  That said, it is quite a different game experience, since the games focus on quite different things.  Up to a point, Chain of Command focuses on overall commander effort and activity, whilst WRG concentrates on the effect of the decisions only.  It has a more laborious system of written orders and radio nets and so on to work out what can happen and when, rather than introduce systems based on dice (or cards, or whatever).  I think CoC works a lot better for this, especially two-player, since the system provides the friction.  In solitaire games, the WRG system works out just as well, I think.  One thing where CoC, and modern rules in general, are clearly better is in providing useful force morale rules, which don't really exist in these WRG rules.  Platoons can be routed, destroyed or captured, but technically you can fight until the last platoon: modern rules with their break points do this kind of thing much better.
One big difference is the spotting rules: infantry are not particularly strong in this game but they are almost entirely invisible.  The battlefield I used covers c.900m x 650m.  Firing infantry can only be spotted at a maximum of 500m, which might explain certain oddities of the battle above: the flanking platoon was being hit by stuff that their commanders and support platoon couldn't see.  I committed myself to following the original orders, but if I were playing from scratch, I would have used different tactics for this reason alone, with the supporting platoons pushed forward more and conversely more of the flanking platoon held back in support.
One shock I got: I hadn't realized that Stug IIIs are pretty much invulnerable to 2-pounder guns in this game!
Figures were mainly Baccus 6mm, with vehicles mainly GHQ I think.  Buildings by Total Battle Miniatures.
Posted by JWH at 15:46