DBA: Battle of the Standard (2)

Battle of the Standard (2)

As promised / threatened, this was the second refight I did of the Battle of the Standard (details of the first one are here). The forces and set-up are as before, so please refer to the linked post if you need refreshing! 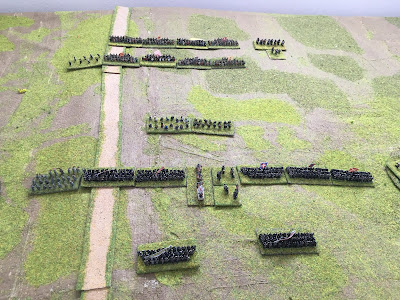 Game Notes: Another enjoyable game of DBA, reversing the result of the first game but also providing a much more balanced game.  The Scottish pike elements with rear support are always going to be challenging to stop, but if they can be, then they must always be very vulnerable to flank attacks.  I have been meaning to do this battle for ages, so I was pleased to get it into the battle, with a proxy standard too!
I do enjoy DBA with all its virtues (simplicity, tightness, speed) although it will always be, by its nature, limited, particularly in terms to army organization - the model is a one-size fits no-one exactly, although I have never really seen too many clear alternatives to this.  To make my point clear, it might be worth explaining why I haven't played DBR.  I much prefer rulesets which deal with the units of Foot and Horse which are closer to those employed historically (tercios, battalia, troops whatever) than elements of 'Pike' and 'Shot' etc.  In that period there are alternatives I know about, and so use; in earlier periods, I don't know of any, so I stick with DBA.  Polemos: SPQR makes a decent stab at representing some of the differences.  I used to play Comitatus and that had a good stab at it too.  There are a couple of magazine rules which had some promising mechanisms also (there was a good one for the Stephen and Matilda civil war IIRC) but nothing I know of which means that I could play this particular battle with the troops organized in a particularly historically plausible way.  Anyway, I feel a longer blogpost about rulesets coming on, so I will leave this one here...

Figures by Baccus 6mm, except the standard which is by Irregular Miniatures.
Posted by JWH at 21:00