In some ways it is a bit odd to be writing about my preparations for an upcoming refight of the Thirty Years War when I am just starting my Gallic Wars campaign, but I try and do the planning for one campaign whilst I am playing a different one (because painting and other prep can take a while).

I have settled upon using Twilight of Divine Right as the tactical rules for the campaign, since they have proved able to handle the biggest battles of the period on a relatively small table (4.5' x 2.5') - this is currently a sine qua non for my gaming as there is no chance of me getting regular or undisturbed access to a larger table. 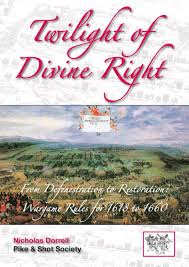 I totted up all the forces required to play all the scenarios in the Europe's Tragedy scenario book for the Twilight of Divine Right rules.

These came out as:

I have pretty much all of this anyway for my ECW forces, I just need a few units of Commanded Shot I think. Twilight of Divine Right has worked fine so far with me using single bases of 60mm x 30mm, which is standard Polemos basing, although strictly speaking the rules would seem to prefer a depth of 15mm for this frontage - I can probably ignore this.  An Early Tercio should be double-depth, so that would be two units butted together, no real problem.

As I have mentioned before, I would really like to use command stands with appropriate flags although this will mean doing some form of re-basing for my ECW units.  I am vaguely thinking of having a small magnetised strip on the base for the command base only, although that may get fiddly.  Anyway, I have bought some extra command strips and various TYW flags to experiment with and hopefully I will have sufficient time to do some small experiments this week, so I can buy anything else I might need at Hammerhead next week.