Neil Thomas' Wargaming an Introduction: The Battle of Dreux 1562

Next in my series of refighting scenarios from old wargames magazines comes this one from Miniature Wargames 8, featuring the Battle of Dreux.

This one appeared in a series called "Military Developments of the Sixteenth Century" which was pretty good for the standards of the day in actually getting a decent balance between describing the battle and describing how to actually stage it.  However, I was helped a lot by using Don Featherstone's scenario for the battle in his Wargaming Pike & Shot. 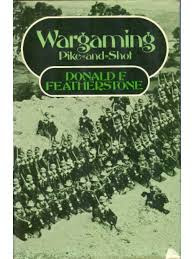 Reading it was interesting in that although there was probably less hard information in there, Featherstone always spends a lot of time in describing how to transform a battle into a wargame.  Despite their very different approaches, this isn't so different from the Grant way either.  Perhaps most veteran wargamers end up with quite similar views on this.

The French Wars of Religion fall right in the middle of my main interests (and armies).  Not having C16 armies, I took the Kinchian advice of making the game fit the figures and adopted a compromise: gendarmes would be represented by c.1500 Men-at-Arms, whilst everyone else would come from my War of the Three Kingdoms forces.  Obviously my mid C17 regiments of Foot are not really very like Swiss pike blocks or Spanish proto-tercios, but this is Heretical Gaming, after all...

I used the Pike & Shot rules from Neil Thomas' Wargaming: An Introduction, which were at least written with this conflict in mind. Dreux is rather too late for DBA and rather too early for Polemos ECW or Twilight of Divine Right; and my basing doesn't suit DBR.  I think maybe that David Heading (Author of Polemos: ECW) has a set that might be suitable...


Game Notes: A good fun game, although the Huguenots always felt a bit up against it in this scenario, especially after their disasterous start!  Neil Thomas' rules are very intuitive so it is easy to pick them up again having not played them in a while, although that isn't true of the tactical niceties.  I'm not convinced that the Reiters vs. Pikemen is calibrated quite right, because Reiters can't both get close enough to fire pistols and also disengage: if they are close enough to discharge pistols, they are close enough to be caught by the pikemen. But this quibble apart, the rules seemed fair enough, generally.
The rules as written use both casualty points (hits) and base removal: after every four points received, then a unit will lose a base.  Because I use single base units, I instead use the system from Neil Thomas horse-and-musket ruleset published in Battlegames magazine, "Simplicity in Practice": the attacking unit rolls a die to convert hits into a casualty (the equivalent of removing a single base). So if a unit scores 1 hit, that is converted to a casualty on the d6 roll of 5-6; 2 hits is 4-6, 3 hits is 3-6, 4 hits is 2-6; hits over 4 start again (so 5 hits = 1 roll as 4 hits plus 1 roll as 1 hit).  Commanders are also used; if a commander is persent with a unit, it may re-roll once any failed morale rolls, but if a commander is present with a unit when it is eliminated, the commander is captured or killed.
Figures were a mixture of Baccus 6mm Late Medieval and European Crisis ranges.  I think the buildings are a mixture of Timecast and Leven.
Posted by JWH at 20:51