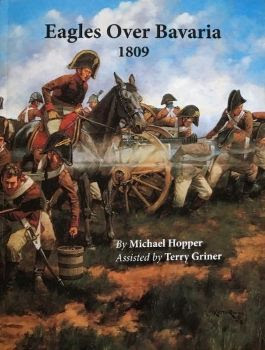 This scenario is from Michael Hopper's Eagles Over Bavaria.  Featuring a little-known clash, it recreates an Austrian attempt to separate Davout's Corps from the remainder of the Imperial Army.  Most of Davout's Corps were in action at Teugn-Hausen this day (I have done a Teugn-Hausen scenario before), so the Austrians led by Rosenberg confront a French force mainly of light infantry and cavalry and led by Montbrun, which aims to delay or stop the Austrian attack.

The French are trying to retain control of Dunzling (right) and a presence in the woods to the West (left).  The Austrians are trying to capture Saalhaupt (top-left).


Game Notes: A quick, enjoyable game although a little one-sided since the French had no luck at all, except in the uselessness of the Austrian Foot artillery!  It wasn't so much that any individual combat should have gone the French's way, but at least one or two of the combats should have.  The key combat was actually Rosenberg's bayonet charge which prevented Montbrun's bold decision to use Pajol's reserve battalion in an offensive rather than defensive role from working.  Montbrun could feel let down by this - the odds were about 2:1 in his favour that the French would win the combat and drive the Austrians back and then perhaps create an opportunity for his cavalry to exploit.  After this, all of the combat slightly favoured the Austrians, but it was unusual good luck for them that the French got nowhere.  The rules used favour infantry over cavalry more than in most sets I think, which obviously helped the infantry-heavy Austrians in this scenario.