Twilight of Divine Right First Look - The Battle of Fleurus

The Battle of Fleurus (1622), which took place between a Spanish army and Protestant forces in Dutch pay, is one of the two sample scenarios in the new set of rules - Twilight of Divine Right -  by Nick Dorrell for the period 1618-1660 in Europe, covering the Thirty Years' War and the English Civil War. 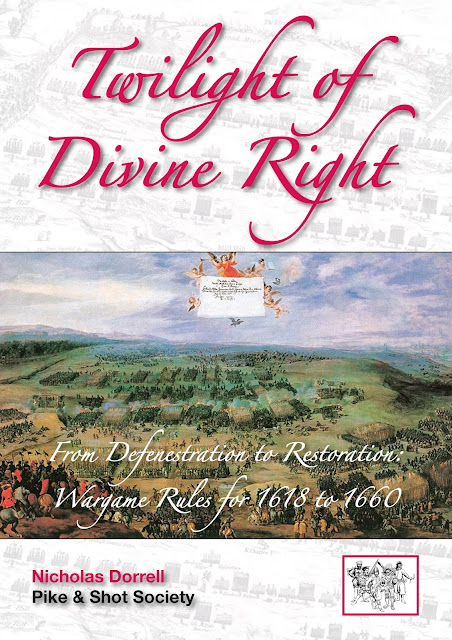 The scenario is helpfully quite small, featuring the following forces:

I don't have any specific TYW armies, so I proxied my WotTK's forces: the "Spanish" are Royalists, the "Protestants" are Parliamentarians.

Game Notes: Obviously no first game ever goes totally smoothly, but I did find these rules pretty intuitive.  There is no 'combat' mechanic as such: this is assumed to be automatic and the game only adjudicates the effect on morale (and in some circumstances, movement).  This actually resembles the mechanic I recently encountered in the Napoleonic Portable Wargame.  I think I first saw it Wargames Foundry's Age of Reason rules, where units had to test "Resolution" in much the same way.  It is all reasonably self-explanatory.  There are a fair number of possible modifiers but only a few will apply to any given combat, so this can be internalized very quickly.  There is a mercifully simple pursuit mechanic as an outcome, plus wing and army morale tests which are quite similar to those found in the Polemos series of rules.

Command and control problems are centred around action test for carrying out manoeuvres.  Some manoeuvres are easy and automatic, but others require a bit more skill and determination and have to be tested for.  Some units, and unit types, find this easier than others.  Better generals can do more of these kind of things.
The rules really encourage depth of deployment and support.  This is not only reflected in morale/combat modifiers, but also in the tests: one can do relief in place manoeuvres, and cavalry does much of this automatically, as damaged units automatically regroup behind supports.  I really liked this.  It makes a big change from the Polemos rules I am more used to, where doing this kind of thing is incredibly tricky and a big focus of the game is in managing how to use second and third lines of cavalry effectively.  This game seems to make that a lot easier.
There is quite a lot of detail in the set-up of this game.  There are a number of different infantry types (e.g. early tercios, tercios, Swedish brigades, regiments, with regimental guns or not, etc.) and cavalry types (cuirassiers,  Dutch-trained, Swedish-trained, Harquebusiers, Light Horse etc.).  This allows the rules to model the differences without much fuss.  There is a different scale for fighting the really big battles.
One thing to bear in mind looking at the pictures and reading the report is that I am effectively playing a 'scaled-down' version (although one which is supported in the rules).  The rules suggest two bases per unit, and the authors use 60mm x 30mm bases, effectively making a deployed unit 120mm x 30mm.  I was using a single 60mm x 30mm base as the unit, which allowed me to play this scenario on a half-sized board: 2'x2' rather than 4'x4'.  This fulfilled my objectives perfectly: I was looking for a ruleset which would allow me to play the bigger battles of the TYW on a relatively small board.  My circumstances will change later on in the year and space will again be at more of a premium, so this will be perfect.  I am really looking forward to getting a few more games in with this in due course.

Figures, tents and animals by Baccus 6mm, building by Leven.