The Battle of Benburb was the biggest and perhaps most important victory of the Confederate Irish in the entire War of the Three Kingdoms.  A scenario for it was published in Miniature Wargames 85: 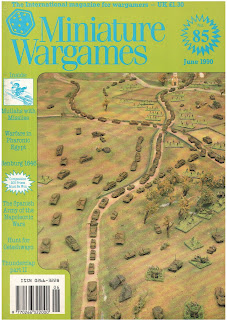 It is a very suitable battle for wargaming, with not too many troops or too much difficult terrain.  The whole campaign and the day of battle is full of interest, but, as suggested in the scenario, I only played out the main battle at dusk (after an attempt to turn the Confederate flank has failed and the Confederate horse has turned up).

*Used because Monro had used a unit of Commanded Shot earlier in the day; feel free to use another shot-heavy unit instead

The game is a straight-forward battle; the game can only last for a maximum of 18 turns (an hour-and-a-half) since this part of the battle didn't begin until 8pm.


Game Notes:
Interesting but not wholly satisfactory in this sharp reversal of fortunes compared to real life!  I think my tactics for the Protestants were rather better than Monro's on the day, aggressively hitting the Confederates at the greatest moment of disorder (just after crossing the stream) - this explained part of the difference.  That said, I think that the effective -2 penalty for attacking across a stream is probably just too harsh on an opposed D6 roll,, especially since the follow up combat will be at -4 or -6. Overall, I think it adds to the sense that I am getting with more experience with these rules that there are slightly too many factors with slightly too great effects and those effects are distributed between individual situational modifiers and "shaken" results.

I chose not to incorporate fatigue into the game, although it was clearly a factor in real life, because blanket "shaken" or "-1 to everything" seemed too harsh.  I'm thinking now that perhaps it needs to be in; or as an alternative, increase the TP cost for actions to produce a more lethargic performance on an army-wide basis.

I'm  quite looking forward to giving this one another go  at some point in the relatively near future.

Figures as ever by Baccus 6mm.