Campaign Battle 23: The Battle of Arevalo

The Battle of Arevalo, early July 1809

General Situation: Elio, who had retreated in the face of Moncey's surprise advance from the main French concentration area near Salamance towards the northern passes to Madrid, decided that he needed to resume his advance and threaten the French line of communication with Burgos and risk battle to achieve that objective.  Moncey, who had thought his aggressive move had been sufficient to restore the French situation, was surprised and perturbed to hear of Elio's advance and quickly moved to occupy a defensive position.  He was determined to hold on at all costs, as defeat would probably imply a retreat for the entire Army of Spain as far as Burgos, if not France itself...

A reasonably sanguinary battle for the Spanish, but a true horror story for the French: the fresh Spanish cavalry were able to really hurt the defeated French forces in the post-battle pursuit.  The Spanish lost c.3500, almost entirely from the infantry and mainly from Mendizabal's forces which had two distinct hard fights.  The French lost c.7300, over 4000 of them in the pursuit, in addition to 30 guns.  General Clausel fell at the head of his troops, on the point of achieving an unlikely victory: 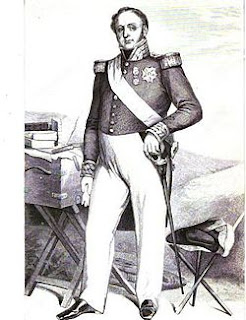 This result is likely to have the most profound consequences and there is no time for Moncey to rue the outcome of the battlefield.  He has no cavalry and his infantry are shattered: does he withdraw northwards to safety but leave the Army of Spain with Elio's army on its lines of communications with Wellington at its front?  But will the situation be even worse if he marches westwards back towards the Army of Spain.  A sleepless night to follow a bloody day for the unfortunate Marshal...

Game Notes:
A good, tight game which just might have gone to the French.  The first crisis was only resolved because of the unfortunate death of poor Clauzel at the critical moment robbed the very successful French spoiling attack of its impetus.  The second crisis was survived because every Spanish brigade held on, in some difficult circumstances.  In no individual case was a Spanish brigade more likely to break than not, but it was much more likely than not that at least one Spanish brigade would.  As it was, once Clauzel's division was broken, then it was only a matter of time before the Spanish would exploit their better position and numerical strength to overcome the (marginally) more skillful French troops.
It is noticeable that as the campaign progresses and the Spanish have suffered rather fewer disasters than their historical counterparts, the Spanish armies are becoming relatively much stronger and more capable than their historical counterparts.  Many Spanish divisions are approaching the quality levels of their opponents.  Conversely, many French divisions are at 1811-12 levels of ability rather than 1809-10 levels.
Once again, the Tomb for an Empire campaign rules provide a powerful incentive to not use cavalry in the battle but save it for the post-battle pursuit: the fresh Spanish cavalry effectively doubled the size of French losses.
I discovered I have been making a small mistake in the distribution of losses after a pursuit.  As the rule would have materially affected the way I approached this battle, I will implement it from the next engagement.  I still need to sort out the artillery! Moncey seemed to have far too much. Not that it did him much good in the end, and he did lose it all..
As ever, Polemos General de Division gave a very good game. The game did bring up what I dislike most about the rules though: the occasional clash of rules with no idea how to resolve them.  Here, it was the situation of what happens if a unit, which must pursue for 1BW after breaking its opponents, contacts another enemy unit or approaches within 1BW (which wouldn't normally be allowed)?  I have personal answers for this kind of thing, which I have either got from the forum or just given myself a common-sense ruling, but it is the kind of thing which causes interruptions in the flow of the game.
This is the first game I have played using one of my new home-made terrain mats. I tried to make this one reminiscent of the drier, browner look to many parts of the Peninsular.  I was quite pleased with how it turned out!  Otherwise, as usual, figures from Baccus 6mm and buildings from Total Battle Miniatures.  Game played solitaire on a 5'x3' table and took about two-and-a-half hours of play.