Never one to intentionally waste a good scenario, I found that I had sufficient time to replay the 1141 Battle of Lincoln, previously done as a DBA battle, using Neil Thomas' Ancient & Medieval Wargaming set instead.  It shares some key assumptions (keep it simple) but is really on a different branch of rules development.  In particular it has an emphasis on attrition, where DBA emphasizes shock. 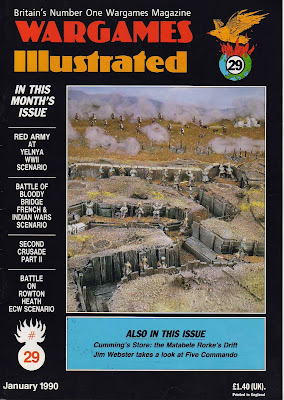 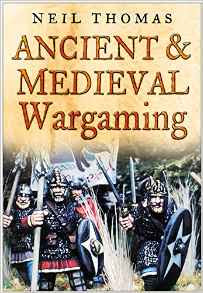 
Game Notes: Another fun game, with a fairly similar outcome to the first.  If anything, this felt a bit easier for the Rebels.  Why is that?  In Thomas' more attritional rules, numbers matter both for inflicting and absorbing damage.  In the DBA-battle, the Welsh were dispersed much more quickly than in this battle, in which the Welsh were able to delay and damage the oncoming mounted attack.  Not by much, but by enough.  In DBA, the tactical battles tend to be both more equal and more chancy.  The physical character of the battles change slightly but noticeably too.  Damage in A&MW is straightforwardly represented by physical losses, whereas in DBA the more basic element of damage is the 'recoil', which can then be exploited to lead to losses; conversely there is also a much higher chance of quick-killing entire units than in A&MW.  However, A&MW can effectively model a degree of fatigue as losses mount in small increments in a way impossible in DBA.  So, À chacun son goût and all that. A&MW remain very user-friendly rules, you never feel lost or confused (although you may well disagree with some of the assumptions).  I used the variant from Thomas' Simplicity in Practice horse-and-musket era rules where hits achieved are used to generate a dice roll to see whether a full base is removed or not.  I think the change works from a game point-of-view, although I accept that this changes some of the probabilities implied in unit match-ups quite a lot.

Figures by Baccus 6mm, buildings by Leven and Timecast.