The Battle of Wilton was another clash in the Anarchy-period civil war in England.  King Stephen was at Wilton preparing an expedition when Robert of Gloucester advanced and attacked him.  A scenario based on this battle was published in Wargames Illustrated 31, the last in the series of articles written by Stephen Simpson. 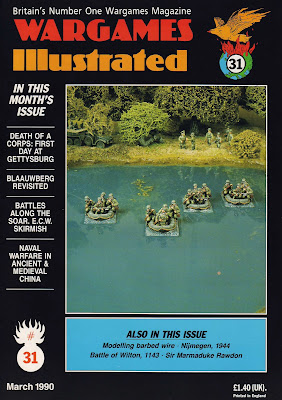 The scenario features two identical forces with one side (the Rebels) in a better position.  This refight used the DBA rules and each army was composed as follows:
2 x Generals (3Kn), 4 x Knights (3Kn), 6 x Spearmen (Sp)
One of the generals on each side (King Stephen for the Royal Army, Robert of Gloucester for the Rebel Army) incurs the double-penalty if lost, the other general on each side does not.  The slope of the terrain is considered to be continuous to the edge of the town and the river (i.e. the side closest to the hills is still considered to be 'uphill', even if visually it looks flat).

Game Notes: I didn't get around to finishing the necessary conversions to make Stephen Simpson's own rules (published in this same issue, Wargames Illustrated 031) playable yet with my armies so I reverted to DBA.  It gave a decent enough game with a result not entirely different from that in the historical battle which is a strong point in its favour, although the style of command is perhaps not as flavourful as a specifically-themed ruleset might be, which is why I am keen to give the author's own rules a try.

One historical thing which I would like to know is was there any difference to how armoured and unarmoured infantry fought - one might expect the armoured infantry to be in the front ranks for example, or in certain circumstances in their own groups.  I would like to know more about the proportion and usage of missile-armed troops too.  For the physical set-up of these games, it has become apparent that an appropriate castle and some town walls are the sine qua non for this period, since castles were clearly everything (Stephen ransomed one of his important nobles captured at Wilton by handing over a castle).  I must get an order in with Leven, or even better, see them at a show...