The Gallic War: 58BC

The Gallic War starts with Caesar's Legions in position in Transalpine Gaul, ready to attack.  The Allobroges & Volcae have already allied with him, but he is opposed by the Helvetii in Switzerland.  Ariovistus and his large force of German warriors, his implacable opponents, lie across the Rhine... 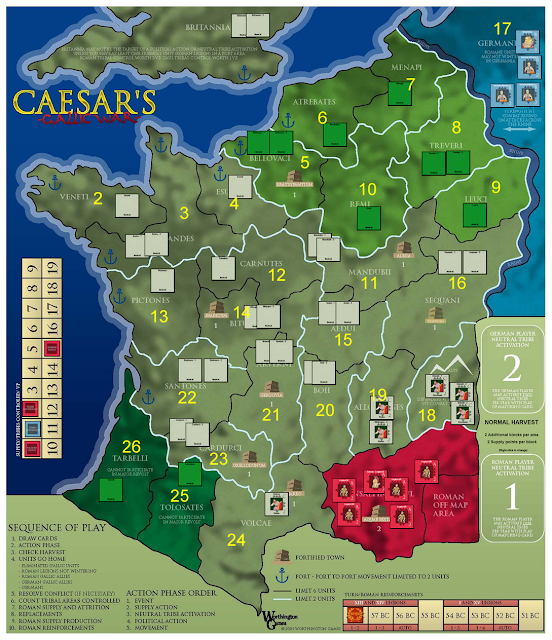 The campaign began with Caesar attacking the Helvetii with four legions.  Ariovistus meanwhile persuased the Treveri just across the Rhine to ally with his cause.  Caesar's attack with c.16000 soldiers led to the Battle of Octodorum and the crushing of the Helvetii's 9000.  For the loss of nearly 1000 of his men, Caesar's victory and subsequent operations led to the control of the Helvetii's tribal areas.  He then moved two legions west to support the Allobroges, following this up with a campaign against the Boii, who were overwhelmed without much of a battle.  Lacking a force in a position to directly oppose the Romans, Ariovistus encouraged his Gallic supporters to concentrate on partisan warfare, attacking convoys and local Roman supporters.  Annoying though this was, Caesar concentrated on using force to bring the Gauls to heel, turning his attention to the Aedui, which followed a similar pattern to that of the Boii, although the Aedui resisted with much greater ferocity, the Romans losing 4000 men in two months of intense if localized warfare. In the end however, the resistance of the Aedui collapsed too.
In the North-East meanwhile, the Treveri attacked their neutral neighbours, the Leuci, breaking their resistance and forcing them into alliance, although not without suffering in the local skirmishes and raiding.
This was followed by a break in the fighting as both sides tried to recruit new strength. Caesar persuaded the Treveri's south-western neighbours, the Mandubii, to join him, whilst secret emmisaries from Ariovistus travelled to South-West Gaul and persuaded the Cardurci to fall in with the Germans and against their neighbours, the Volcae.
Caesar then ordered a combined Roman and Mandubii force to invade the lands of the Treveri; the Treveri quickly returned from the lands of the Leuci to defend it, whilst being joined by Ariovistus and six thousand German warriors.  A very hard fought battle occurred (the Battle of Porta Silva Carbonaria) which resulted in the Germans and the Treveri being forced to retreat.  The Romans and the Mandubii lost c.2000 men, whilst Ariovistus and his allies lost roughly double that and were forced to retreat into the territory of the vanquished Leuci. 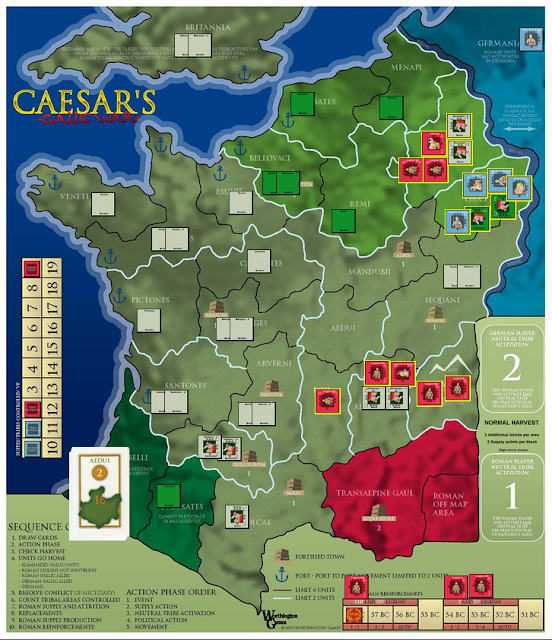 The harvest this year was fair.  All the tribes returned to their homes, with the Leuci joining the Germans, the Boii, Helvetii and Aedui joining the Romans.  All the Romans returned home, except IX Legion which remained in the Treveri's territory in order to protect it from a sudden attack by the Germans in the spring.  Ariovistus and one o fhis contingents remaineed in the Leuci's area, the remainder returned across the Rhine.  The Romans and Germans were able to reinforce all their legions and contingents back to full strength - in addition, Caesar received an additional legion (the XIIIth).
Game Notes: Going smoothly so far...the Romans have definitely had the best of the year, a combination of aggression and luck paying off and leading them to controlling a good chunk of central and eastern Gaul.  Ariovistus' position is by no means hopeless but his gains have been relatively minor so far.
(n.b. The boardgame Caesar's Gallic War is being used as the engine for this campaign).