The Battle of Five Hills: 58BC ended with the Romans having had rather the better of the previous years' campaigning.  However, Ariovistus was in a position to attack the edge of the Roman-controlled area and thus launched an attack on his erstwhile allies, the Treveri, who had defected to the Roman over the winter in order to save their tribal lands and families.  These new-found Roman allies were supported by the IX Legion.

Ariovistus had dived his forces to attack from two directions - a strategy which would be likely to deliver a crushing success if it worked out well, but risked his forces being defeated in detail.  His own army would pin the Gallo-Romans before the flank attack came in on their left, hopefully sweeping all before them...

The Battle: (I am missing a few photographs right at the start of the battle).  In essence, the Romans and Gallic Cavalry took the offensive, hoping to destroy Ariovistus' smaller forces before his reinforcements arrived and turned the tide of the battle.  The Gallic Infantry also attacked but in echelon, in order to provide some more flank protection against the arrival of Adalgard and Widald).

Game Notes: A very interesting battle.  Ariovistus was on the strategic offensive (to destroy the Gallo-Roman in its advanced position), the grand tactical defensive (because Geta calculated his best chance was to destroy Ariovistus before his flank attack arrived) and the local offensive (because soldiers in SPQR generally, and tribal armies particularly, function a lot better when attacking).  Of course, ultimately the battle was decided by the German flanking attack simply not arriving, but even in the course of the battle, there were a couple of moments when it might have gone the other way.  Ariovistus' attack worked, but it took much longer than it should have done due to skilful Roman resistance; Samo's attack was not lucky to have broken the leading German foot warriors but was very lucky to break the second line so quickly - that could have, and maybe should have, gone the other way. 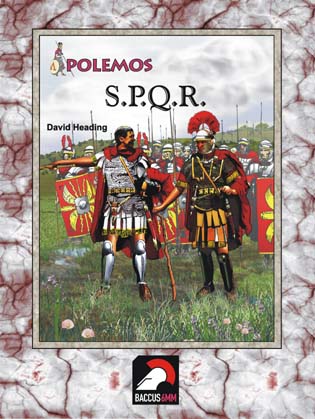 The Polemos SPQR rules generally worked fine.  I think this battle worked better than the two previous ones since I had reduced somewhat the amount of cavalry available to both sides.  The only query I had was about the concept of 'groups' which are one of the basic elements of the game.  The rule is:

"Groups of bases are formed when bases touch, side to side or front of the rear base to the rear of the front base.  Any base in such contact with another is counted as being in a group with it, unless the base is shaken or halted as a result of a combat outcome.  Groups may be formed of several ranks.  Within a rank, the troop types must be the same'.

a shaken base can never be part of a group.

I don't think it is always clear when troops recoil or break which troops should follow up and pursue and which shouldn't.  As written it seems that flanking support units follow up recoiled units but rear support units don't; but all units which took part in a charge (whether they made contact or supported) will pursue if the target base routs.  If so, I would disagree with the first part, since the factors in close combat imply that the rear support units are pushing forward with the forward troops.