I saw the Battle of Ripple Field battle done on The Stronghold Rebuilt blog recently and it piqued my interest, partly it just looked fut, partly since I had never heard of it and partly because it looked just right to be converted into a bijou scenario for Polemos: ECW. 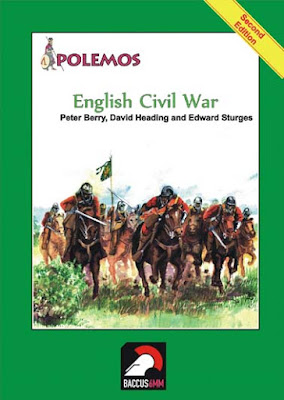 Prince Maurice and his Royalist Force are advancing towards Tewkesbury and Waller's Parliamentarians are trying to stop him, or at least delay him.

The Raw Foot come on as reinforcements on the first turn that Waller throws a '6' for Tempo.

I went for a slightly enlarged scenario easily converted from the original; I think that using an order of battle closer to the historical numbers would lead to using the numbers in brackets instead.


The Terrain:
The ploughed fields have no effect in this battle.  The wheat fields with hedges (DV2) around them are counted as enclosures with DV1.  The slopes of the hills are gentle.  Ripple village is DV2.


Game Notes: A good fun game that fulfilled its promise.  Polemos ECW handles this size of action pretty well.  The game proved that in Polemos ECW, well-handled disciplined Parliamentary Horse can give a very good account of itself versus the hot-headed Cavaliers, since the Cavaliers' charge is such an all-or-nothing tactical move and the penalties for being caught in a disordered pursuit are so intense.  The success of the heroic Parliamentary Horse troop around the enclosure would be very unlikely with Royalist cavalry, since they would have just hared off in pursuit when they overcame their first opponent (which is what happened in fact to Crawford's troop).  The only thing I wasn't happy about was the methods of the Royalist victories involving flank attacks on victorious Parliamentary Horse.  It has been a little while since I have played these rules but they were basically identical: the flanking troop of a defeated line of Royalist Horse was able to turn and advance to contact into the flank of the victorious Parliamentary Horse.  I can't remember any rules which would prevent this (either a rule stating that so much of an advance to contact must be straight ahead, or that flank supporting Horse must fall back a certain distance if the Horse they were supporting is routed) so it seems legal, but I am not that convinced...

Anyway, thanks to Kaptain Kobold for providing the insipiration to do this one!  I believe he is using a mod of Bob Cordery's The Portable Wargame for the War of the Three Kingdoms, which may be published commercially at some point.

Figures by Baccus 6mm, the buildings mainly by Timecast I think.

And that clears the backlog of AARs, with the exception of a few Air Portable Wargame reports which I will do in a big batch once I have played a few more.
Posted by JWH at 07:29