Again, I reloaded this scenario for reasons I cannot quite remember!  Something must have been bugging me...I think it was the built-up area rules.  In this game, the garrison is limited to a single base, which I think is a more natural way of reading the rules, but on the other hand, limits a city's effective garrison to 500-1000 troops...

Incidentally, this is what the campaign map looks like at this point: 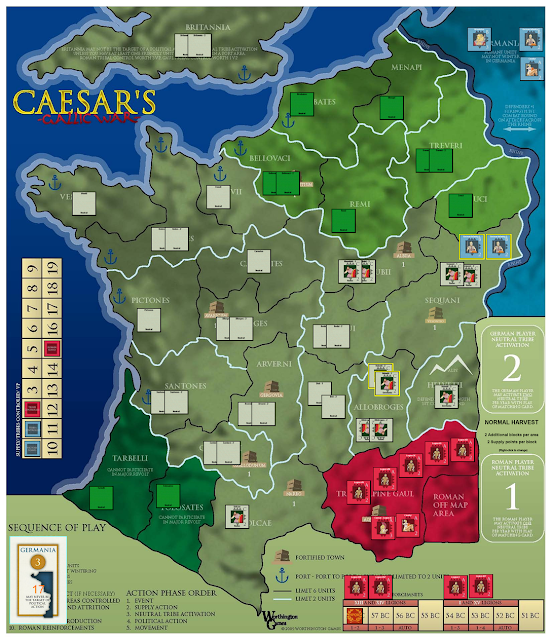 Anyway, all the scenario details and forces are the same as for the previous battle - please see here for details.


Game Notes: At this point, the Helvetii's Right and Centre collapsed simultaneously, so despite having taken the settlement, the Helvetii rout to the rear and the Allobroges have saved their territory from the German-backed Helvetii.
A good game this, full of incident.  The Allobroges won against the odds, and despite the early loss of the city, because the Helvetii really struggled to deploy their full strength, were defeated in detail on the Right and lost the 50:50 encounter in the centre.  I don't think there were any major problems with the game although I am still not quite sure about the rules' intention regarding the size of forces occupying built-up areas.

What is more worrying is that I have had this campaign 'on the radar' for over six years now!  It was interesting reading back: I thought that the campaign engine would be a problem, which wasn't the case really when I gave it a proper look; what has been a problem is that I have never committed to a single ruleset in the way I had for Napoleonics (Polemos General de Division & Marechal d'Empire) and for the English Civil War (Polemos English Civil War).  So because I have doubts in my general gaming about Ancients' rulesets, that has led to much procrastination about the rules for my campaign: I think I have played nearly a dozen "test games" in one form or another without decisively starting the real thing!  I wish I could say I have now solved this problem, but it is absolutely not the case...

Figures again by Baccus 6mm and buildings by Timecast.
Posted by JWH at 15:44