The Portable Napoleonic Wargame - Battle of Helmstedt (the Division game) 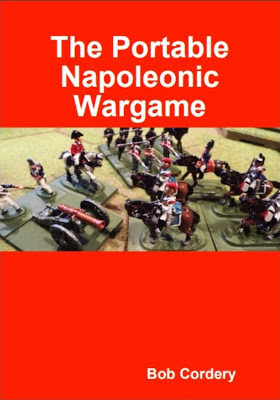 This is the example battle for the rules for Divisional combat, featuring a Prussian force attempting to stop the advance of a French division.  These Divisional rules are very similar to the rules designed for Brigade-level battles but one base represents a couple of battalions, a regiment or a small brigade.


Game Notes: Another good, fun game that rattled along at a fair old pace.  The mechanisms are quite similar to those in the Brigade game.  Two different systems of activation are proposed: one card-based, one dice-based (i.e. copy DBx!), although the option is also given to ignore activation (as in the brigade game).  The main apparent difference is that two infantry units can share a sqaure and adopt some formations specific to regiments/brigades: mixed order, double columns and double squares.  There are also some more subtle changes: units are relatively slower and less flexible: they can move or fire or change formation, and so on.  Personally I feel that these make more of a difference to the game play, because they make cavalry much more useful relative to the other arms compared to the brigade game, especially in a meeting engagement.  I don't think that my refight was entirely a fair test: I used the DBA system and the French were much more fortunate in their rolls early on, so as well as being the stronger force, with the stronger cavalry, they were already putting the pressure on the Prussians from practically the beginning and the they could never get themselves organized.  That said, I don't think that I am wrong about the power of the cavalry: their powers are largely intact whilst the powers of the other arms are reduced.  Of course, as mentioned in other reports and by the author himself, the rules are very, very easy to tweak to taste; and the tactical usefulness of cavalry in the Napoleonic era has been disputed ever since the actual wars themselves...