Rather than fight a separate German counter-attack battle ("The Punch from Wunch") I included the extra German units as optional cards into this scenario instead.  For the British, they aim to clear this spur before reaching their final objective, the village of Ratray.  For support options for the British platoon, I picked:

I hoped to fight a mainly defensive battle, with hopefully the better concealment of the anti-tank guns being more useful than the mobility and armour of the Shermans. 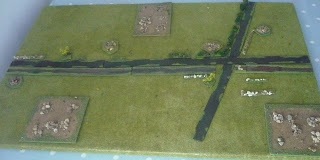 
Game Notes: A very interesting encounter as it turned out nothing like I was expecting!  I was expecting a fluid armour vs anti-tank encounter and what I got was a grinding infantry battle.  The card deck was nearly exhausted by the end, as some of the firefights went on for a long time.  The rules are pretty realistic: the infantry battle only gets deadly at very close ranges or if large groups try to advance under fire.  However, this battle did turn up a problem with the way I have played the rules.  I have included all the support elements within the platoon for all purposes, including morale.  This encounter has persuaded me that tanks and artillery should be in separate platoons for morale purposes and any new campaigns I do will incorporate this.