I headed up to Sheffield yesterday for the Joy of Six show, the first time this show had happened (as a physical event) since 2019.

It was the biggest version of this show, with more traders and games on than in previous years and occupying more physical space.  It seemed reasonably busy without being heaving - maybe 300 people or so? 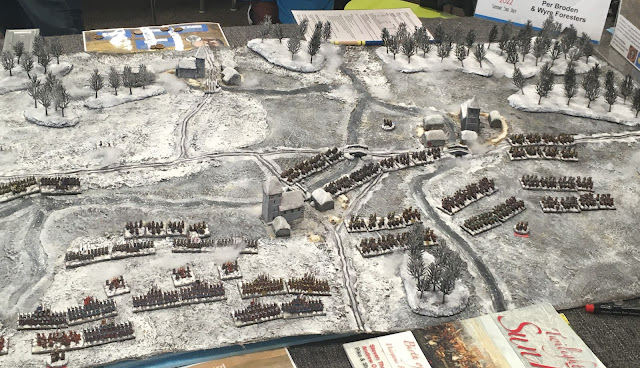 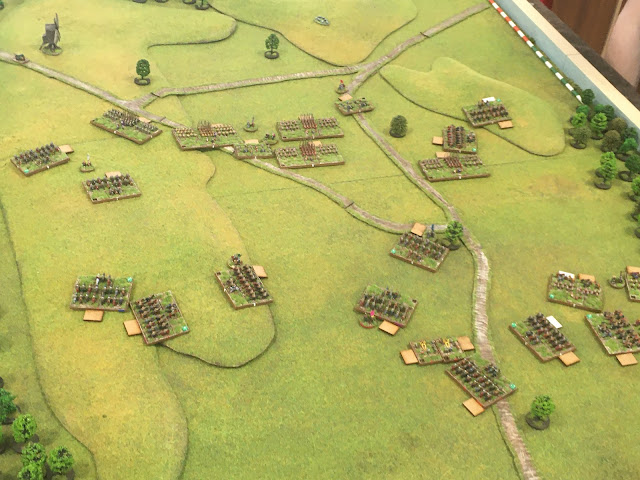 I missed taking workable photographs of a few games: a lovely MAD-gamers 'War of the Worlds' 1890s game; a bijou but interesting looking tank-hunting game; and a small campaign game of Henry V's 1415 campaign (but using 6mm figures for the forces involved). There was also a very nice collection of well-modelled 6mm inspiration pieces.
I had been looking forward to speaking to Sean of God's Own Scale and seeing his Guilford Courthouse game but unfortunately he got COVID and wasn't able to attend. I was also vaguely expecting to see a really big WW1 game but if it was there I missed it! Which will be embarrassing, since it was probably on a 20-foot table that I ended up walking straight past...
It did inspire quite a bit of thought for me on the way home. I haven't reached any very definite conclusions but in no particular order:
1 - Table clutter (I mean markers rather than cans of pop) can quit easily break the visual 'spell'.
2 - Large game demonstrations show lovely-looking large set-ups but don't necessarily show you how to stage a large game, where you want to play that game to a finish (although one answer to this seems to be play DBx, which will get you to the end quite quickly!). The Strength and Honour games seemed to roll on quite quickly too.  I guess more broadly I am thinking about when you would want to put on a 'big' game and when you want to change the scale of the figures and rules instead to get a big battle on a small table. It also applies to how many individual bases you would want on the board.
3 - There are lots of ways to make 6mm games look really good - they are almost entirely about terrain and basing rather than the painting of individual models.
As usual, there were two discussion groups, one about Baccus things in the morning and one about the hobby more generally in the afternoon.  The latter was very busy and featured Dan from Wargames Illustrated, Greg from Little Wars' TV and a podcasting chap whose name escapes me at the moment - Guy from WSS ended up getting involved quite a lot too! But they were all very good and apart from the first question (the hardy perennial of getting more 6mm articles and photographs into wargaming magazines) the discussion was of questions that were a bit different from the last couple of times that this was done: the impact and future of the geographical expansion of the hobby, the impact of various media forms on the hobby and its demographics and so on.  The Baccus' Q&A as ever was quite useful in hearing Peter's thinking about future developments.  He was saying that NW Europe 1944 will be finished very soon, followed by the Soviets for 1944 and 1945. After that, he was planning on pivoting to the Western Desert. For other ranges, Poles for the GNW, a Great Italian Wars' range and Byzantines for the Crusades-era were mentioned, plus the continual review of ranges for moulds which were becoming more worn out.  He did stress though that the size of the WW2 range would be quite a dominating feature for the next few years.  The calls for 'more fantasy' from the hobby panel in the afternoon and Peter's reaction were quite amusing...
The traders seemed to be doing quite a fair level of business for most of the day. Of the main 6mm ranges that were absent, there was Adler, Total Battle Miniatures, anyone selling GHQ, Microworld, Vanguard, Perfect 6 and Leven - also the Polish guys whose range I forget weren't around (they of the nice ACW figures); conversely it was nice to see Irregular Miniatures and 2d6 Wargaming for the first time. I had heard that Grumbler Miniatures were going to be there but I didn't notice them - not sure if that was me and I just missed out! So there is still plenty of room for the show to expand.
Anyway, I got a few bits and pieces to keep me going in the summer: some Vietnam War stuff from Irregular, a few Battlescale buildings, a couple of different Soviet AFVs from 2d6, a few figure packs from Brigade and a mixture of some Early War WW2 (French and British) and some Cold War British and Soviet stuff.  I tried to get some Scotia Polish but unfortunately they didn't seem to be carrying any that day! Same deal for 2d6 Wargaming's Meditteranean theatre WW2 Brits...There were probably a couple more things...I had meant to get a couple of things from Baccus but I never seemed to find a quiet enough time to get them - one for the post next month, perhaps...
Anyway, it was very nice to get back to the JoS show - had a good day, it was nice to chat to a few people I hadn't seen in a while.  It did seem to have a nice 'buzz' to it, possibly helped by having the Little Wars and Too Fat Lardies' teams there for the first time.

Email ThisBlogThis!Share to TwitterShare to FacebookShare to Pinterest
Labels: Joy of Six, Reviews