I managed to get something a bit different to the table over Easter - or at least different for me: Sharp Practice, and first edition Sharp Practice at that...this was what all the cool kids were playing a decade ago but I have just got around to it.  Oh well, this is Heretical Gaming where everything is done wrong... 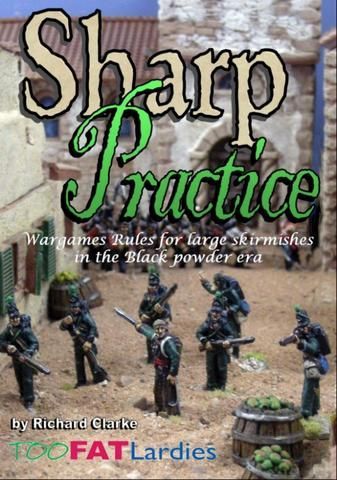 Anyway,  I set up a little skirmish, with a French force and an Austrian force advancing to forage some supplies and hold a small ford over a stream.

And a very good time was had by all.  The mechanisms were pretty easy to pick up and gave a reasonably fast game.  I am familiar with the TooFatLardies' World War Two skirmish game Troops Weapons & Tactics and although by no means the same game ported to a different period, there were lots of familiar points between the two games.  Although there is a lot of tongue-in-cheek chrome to the game to allow for the kind of Sharpe-esque adventure games that seem quite popular, I played this one relatively straight and it seemed to work fine.

There were a few things that got my attention.  Movement is variable, with quite a swing.  Not a problem in itself, but I found the interaction of movement rates, firing rates and visual scale/distance a bit unfamiliar in a skirmish game.  It all works mind, it is more the visual impression is strange for a skirmish game (as if you can fire too often for too little movement;  it isn't true, it is more that the implied ground scale is more like a 'regular' wargame than a skirmish game).  This is probably why many players seemed to play it with an implied figure scale of somewhere between 1:5 or 1:10 rather than actually as a 1:1 skirmish (although the actions of the commanders are in 1:1 scale, if you see what I mean).

The card draw activation works as well as these things ever work.  If you like them great; if not, then not.  Co-ordination between different groups is hard, but there again, it is hard in real life.  I have a minor query about formations: can a single group form a line formation?  The rules kind of imply both that they can and that they can't, at least to my reading (although I may have missed something).  There are enough points of manipulation to somewhat balance the luck with leadership ability and player tactical handling - although this kind of thing is always going to strike some players as meta-gaming overlay. A chacun son gout and all that...

I did have one quite serious calibration issue with the rules (and admitting I may have missed something here): casualties and 'shock' (the main morale mechanic) work on a different scale, so (if you like) losses reduce strength, and shock is compared to current strength.  I am not entirely convinced by this - I tend to think casualties should cause shock in their own right rather than it be an either/or.  But like I wrote above, perhaps I just missed this.

The other problem I had with the rules was one that has been identified more generally by Sam Mustafa: with individually based figures, the single figure will always be the lowest tactical sub-unit if anything is counted in single figures.  the rules really try to make big men and groups the basic units of currency, but there will inevitably be times where some soldiers are counted for firing, others not (this came up quite a lot in the game, since the Austrians were in the trees to begin with during the fight and later the French entered the woods too).  This creates a mini-game of how best to position individual soldiers so they have line-of-sight.  This is fine perhaps, but then you lose lots of the potential streamlining by trying to think of things in groups.  And it means that you need quite highly defined terrain.  More on this in later games, perhaps.

Anyway, all good fun and highly promising for scratching this particular itch.  I think I should do a closer comparison with Paddy Griffith's skirmish rules and perhaps Flintlock and Ramrod too, at some point, to try and work out what I think of all of them.

Also, this is the first game with trees on old CD bases - I quite liked them, they were certainly a lot handier.  Please forgive the slightly crude 'fantasy' cottage too!

Figures are 28mm Perry Miniatures (with the female figure having a Statuesque miniatures head swap).