Since Golymin is quite an interesting battle, I thought there would be no harm in giving this scenario another go.  This time I used the 'stablemate' (and perhaps also, 'ancestor') of Polemos Ruse de Guerre (which I used for the first battle), that is Polemos General de Division. 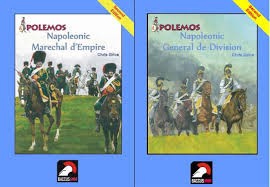 Although structurally reasonably similar, there are some crucial differences in the rules which affect tactics in the game a lot - but more on this in the game notes!

Before you get to into it, I must write that I only took pictures for the first half of this game.  Something came up yesterday which meant the my family and I were unexpectedly busy, so I had to wrap this one up in a hurry.

I won't repeat the  scenario details or orders of battle, which can be found in the write-up of the Ruse de Guerre version of this scenario.  I will just link to this map from Wikipedia though:

For those who are familiar with the rules, the following changes of nomenclature apply:

Well-Trained = Veteran
Light Infantry = SK2 (other infantry is treated as SK1)
Russian Cavalry = Dragoons
French Cavalry = Light Cavalry
For this battle, Augereau is counted as a Capable leader, as are all the divisional commanders on both sides.  Prince Gallitzin is counted as Decisive.
The Set-Up:

Unfortunately, the photo record of the game stops here!

I wouldn't usually put up a game where more than 50% of the battle was unrecorded, but I thought that it gave a little bit of a sense of how Polemos: Napoleonics and Polemos: Ruse de Guerre, although ostensibly quite similar, have quite different game-play feels even though lots of the mechanics are the same.  In mitigation, the Polemos General de Division game described above actually has somewhat similar events to the Ruse de Guerre game.
This is not an exhaustive list but one can consider the following points:
1 - In Ruse de Guerre, most of the destroyed units were destroyed by fire; in General de Division, units were mostly destroyed in close assaults.  This is partly because units are more brittle in RdG, partly because fire is much, much more effective.  This affects both artillery and infantry but primarily the first: artillery can be devastating in RdG in a way simply impossible with GdD.
2 - There were many more retreats in GdD compared to RdG.
3 - RdG generally allows a side to 'do more stuff', whereas the tempo environment in GdD can be a lot more restrictive.  This accounts for the more disjointed nature of Heudelet's attack, for instance.
4 - Commanders really must lead from the front in GdD, and must not in RdG; that is because the bonus is more important in GdD than RdG (+1 on d6 opposed system versus +1 on a d10 opposed system) and the chances of losing a commander are much lower.
Posted by JWH at 11:01