The scenario for this game was converted from one of Steve Jones' "Command Challenges", this one published in Miniature Wargames 361. 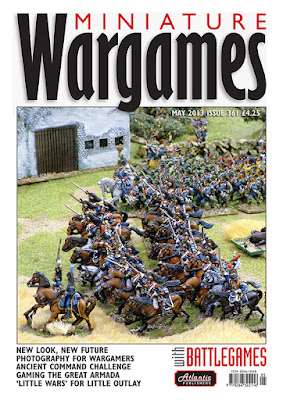 He set it in the Fifth Century AD but having looked at it, I thought it would do nicely moved 400-500 years earlier on into a Romans against Britons scenario for Polemos SPQR.  I omitted the possibility of some lurking tribesmen "rushing to the aid of the victor" which was in the original scenario, but I will definitely include it if I have another go at this scenario!

No messing about in this scenario - this is a straightforward set-piece battle, fought until one side collapses...


Game Notes:
Quite a straightforward scenario this one given the nature of the ground, so the main interest was in seeing how the different troop types interacted.  Some units were much more effective than I expected them to be.  In one case, that of the foot skirmishers, it was simply down to freak dice that the Romans so severely worsted the Britons opposing them.  Other cases were more interesting:  the chariots were more effective in a frontal attack than I had supposed they would be: some of that advantage was down to their veteran/elite status, but not all.  Light horse and archers proved quite effective in delaying and stopping attacks from shock troops, although since they can't convert that into destruction easily, in the long-run that favours the shock troops, since they only have to be lucky once.  The Roman line was too thin - although they won, it was probably harder and slower than it needed to be; double-ranks of bases is really the way to go for shock foot.  As it should be, it was much easier to manoeuvre in this game than in other SPQR battles I have done: terrain plays absolute havoc with ancient-era manoeuvres!!
The only comment I would make really is that the combination of lots of combat factors, plus lots of troop-type factors, probably puts the game beyond easy memorization which will always reduce its speed.  In common with Polemos ECW, it may have a few too many factors.  They aren't difficult to go through exactly, but they can accumulate quite quickly to make near "sure things" as marginal differences add up very quickly to huge advantage when the basic combat mechanic is an opposed D6 roll.   This also places a lot of stress on hoping that the effect sizes of the modifiers are well-calibrated.  DBA seems to work a little better in my opinion, by using fewer modifiers and reducing certainty.