Miniature Wargames 18 featured an article on refighting the Battle of Bouvines, fought between the armies of King Philip Augustus III of France and Emperor Otto IV on 27 July 1214, the latter being allied to King John of England in his wars against the French crown.  Not having a medieval French or German army, I plumped for using my Wars of the Roses armies as substitutes. 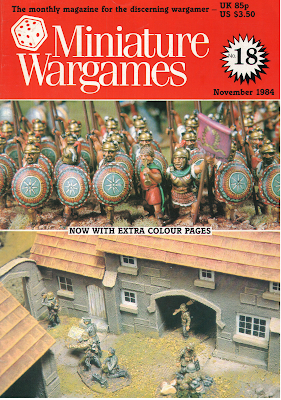 These figures seem a bit on the high side to me! Amusingly, the article writer recommends using a 1:20 figure:man scale for this engagment...Anyway, I ignored all this and just used the relevant DBA army list to generate two reasonable forces, viz: 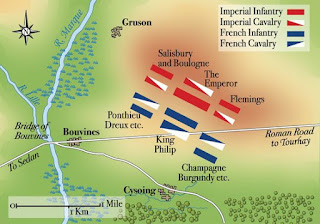 For no very good reason, I plumped for this way of setting-up:

Game Notes:
An interesting game, with the historical result thoroughly reversed!  I think it is fair to say that the luck was with the Imperials: the elimination of the French crossbowmen was a very flukey outcome for the Germans, and without it they would most likely have been just under that little bit more pressure in the centre, which would probably have collapsed under it - they were lucky to maintain their line as it was.  The advance of the French bowmen at the end was suicidally stupid - although bowmen are stronger than knights in DBA (generally), everything else about the situation favoured the Imperials.  More caution would have prolonged the battle and perhaps allow the French to put together a decisive attack on their left, which they threatened but never quite pulled off, because the situation there was too dynamic (in game terms, the German simplicity in the centre allowed spare PIPs to be used to be creative on the flanks).
All-in-all it was a very good experience.  The DBA rules continue to give an exciting game and the PIP mechanism is an excellent aid to solo play, giving command-and-control problems and unpredictability in a very simple way.  Figures used were from Baccus 6mm Wars of the Roses range.  Buildings from Timecast and Leven (I think). 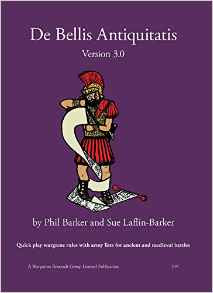 DBA really lends itself to re-theming battles, because all of its armies are expressed in terms of troop types which act consistently through the ages.  So as long as one can find troop types equivalent in the era that one actually has armies for, re-theming is a doddle.  I am sure, for instance, that there are several armies that could stand-in for their French and German counterparts, especially if one picks options that don't include crossbowmen.
Posted by JWH at 14:04