I recently bought the latest set of WW2 air rules from Ostfront Publishing, called Lacquered Coffins and I thought I would share a few initial impressions. 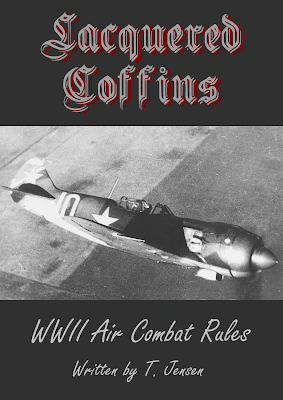 The game is quite a traditional WW2 air wargame (I am most familiar with the Fighting Wings! Series, Bag the Hun and the Mike Spick rules, although I have played others) but it is very stripped down.  It has relatively few plane characteristics, relatively coarse grading of altitude and speed and doesn't appear to worry too much about doctrinal tactical differences and so on. The advantage of doing all this of course is that the game rattles along really quickly and doesn't get bogged down in very marginal differences, or trying to recreate all the precise details of WW2 air combat.  It is all a very easy read and kept mercifully brief.
There are plenty of sample aircraft given, rules for pilot quality, rules for ground and naval attacks and so on too.  There are also some samples missions and a points system and some game aid counters to print out if you wish.  So there is a lot for me to still explore and this is just a first toe in the water.
The basic way it works is to move straight ahead and then do a manoeuvre.  Some tricky manoeuvres mandate a test against pilot quality.  These manoeuvres alter the speed and altitude of the aircraft for the next turn. Some manoeuvres are forbidden to certain classes of aircraft.  Speed and altitude is recorded by a number (the authors suggest using a small die for each placed on the base of a model, but I used rosters without difficulty).  Firing is a die roll for each weapon firing, modified by one of a small number of modifiers.  Damage is recorded very simply, it doesn't employ the detailed "critical hit" systems on many discrete parts of the aircraft as other games do. 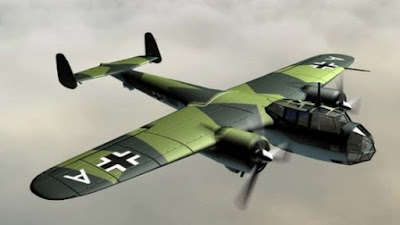 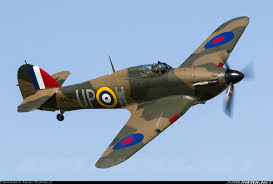 Played on a 5'x3' table (apologies again for the tablecloth!) with aircraft from Tumbling Dice, the game is pretty fast and easy to learn, but the simplifications don't seem to detract too much from the experience.  The use of a protractor  for turning rather than hexes was a bonus.  The rules are laid out in a pretty logical form and are easy to refer back to.  As I mentioned above, there are relatively few characteristics, but there are a couple of special abilities to differentiate different aircraft: for instance, the Hurricane is classed as a "fast climber" (even for a 1940s fighter) whilst the Do17 is classed as a "slow climber" even for an early-war bomber. And so on.
A few things I did notice:
Turning aircraft get to move slightly further than other aircraft if I am doing this correctly (I fully admit I may not be).  So a fighter doing shallow weaves would end up moving faster than an aircraft going straight.
It seemed much easier to kill the pilot than to destroy an aircraft.
The game seemed much more deadly than others I have played (although the game can end very suddenly, so I guess that would limit the number of kills quite drastically)
The Hurricane (early war) is classed as having a 4 x cannon armament rather than the more typical 8 x lmg armament.
One thing which was a little odd is that the sequence of play is hidden away on p.16!  It is an IGOUGO game basically (with some exceptions), but this seemed to work okay.
A very promising start, I'm looking forward to having a few more goes of this.