I went off to The Other Partizan 2021 earlier this month, the first wargames show in meat-space that I have been to since...Hammerhead in March 2020, I think?  Anyway, it was a nice day and the show was pretty busy.  I considered doing a full show report with lots of nice pictures and stuff but somehow the prospect of that felt a bit overwhelming...there was a lot of that about in my mind, a subject which I will return to later.  Anyway, Storm of Steel did a really good video report which I recommend instead!

And Henry Hyde has plenty of nice photos up:

Anyhow, I did enjoy my day (I had to leave at about 1345 to attend my sister-in-law's birthday party!).  There were a lot of nice participation games, lots of enticing traders and some good looking demonstration games.  It was nice to have a chat, or at least say hi, to a couple of people I know.

From amongst the demo games, the ones that have stuck with me were TooFatLardies' bijou but pretty and very playable looking Infamy, Infamy demo; a good-lucking Crecy game; a mid-C19 Europe game by the Perrys (I think); quite a few WW2 games of one sort or another, featuring a quite wide variety of theatres; a lovely, lovely, lovely El Cid set-up, which made me want to get my own Medievals out and try and approximate some of the nice terrain; a couple of really big mid C18 games; and a demo game featuring the conflict in Syria which I thought was quite edgy - done by the Westbury Wargamers IIRC.  Nice terrain though, and since I can read Arabic I had a fun few minutes reading the posters and advertising hoardings!  I am guessing they were run through Google Translate, since most of them worked but a couple of them were a bit odd...but no matter, the look of the thing was great.  The smallest-scale stuff amongst the demo games was a 10mm Samurai game on Hexon terrain by the Forest Outlaws and Kallistra.  There was a very nice-looking Edgecote set-up by the Northamptonshire Battlefields Society (along with a Northampton set-up which I forgot to take a snap of). I had a good chat with 'Trebian' from the Wargaming for Grown-ups blog too, who had some good ideas (unsurprisingly!) about how to stage treachery in Wars of the Roses battles. 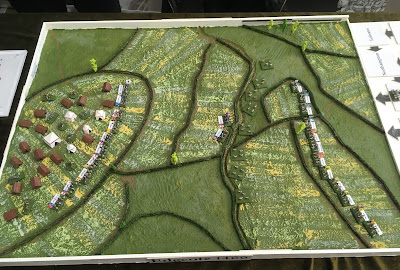 I also played a nice 6mm skirmish game based on the 82nd Airborne at Brecourt on D-Day (as in Band of Brothers), using an adapted version of the All Hell Let Loose rules. 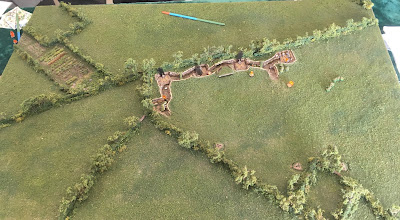 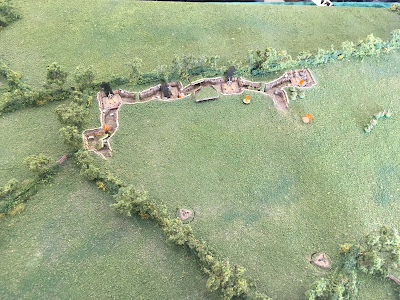 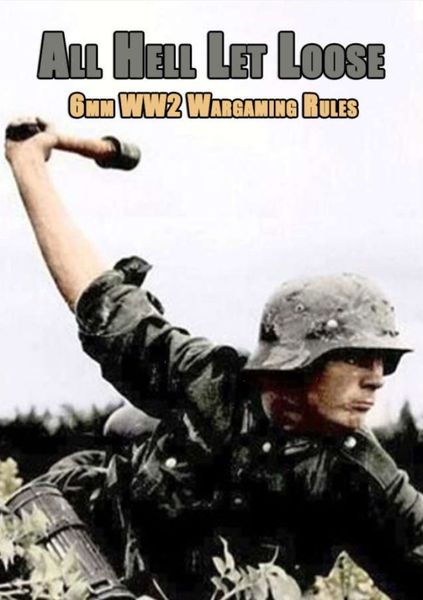 The game looked really good, and no less a hobby luminary than TooFatLardies' Richard Clarke came by whilst I was playing to tell the organizer what a nice job he had done! It was a fun game and it worked surprisingly well considering it used individually based 6mm figures, which I normally find a bit fussy and fiddly.  That said, the way the rules worked then it would have been fine if the figures had just been based in groups as in WRG or Flames of War.  Ultimately I think I was sold on the really excellent scenario more than the rules which were...okay, but had a bit too much 'game' in for me.

I wasn't really in the mood for buying much, although I did pick up a pre-order from the Baccus stand and I also bought the second volume of C17/Thirty Years' War scenarios for the Twilight of Divine Right rules. 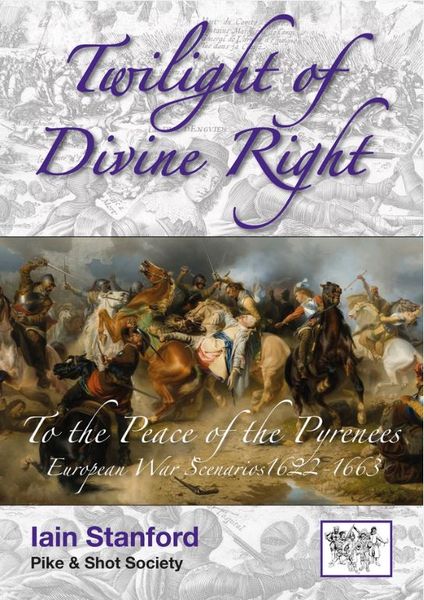 It looks to be very much 'more of the same' as the first scenario book: in this case that is a recommendation, as it covers some of the well-known battles of the TYW that weren't covered the first time around (e.g. Lutzen, Rocroi) but in the same manageable proportions.

I mentioned that I wasn't in the mood for buying stuff, which is true but that was more from analysis-paralysis rather than from lack of interest!   There is also an element of my feeling 'stuffed', like I have as many collections and rules as I can deal with at the moment.  Indeed, it often feels like I have surpassed that point.  In that context, my recent venture into 6mm WSS has felt like quite a big mistake.  I love the figures and enjoy painting them, but there was nothing fundamentally that I needed those figures for: everything I can do with them I could proxy with C17 or Napoleonic figures.  So I should really try and limit the size of these armies.

On the other hand, there are plenty of periods and factions I am still interested in exploring: Mahdist Sudanese; NWF Afghans; Byzantines; Greeks & Persians; Carthaginians; Pony Wars; Napoleonic Poles, Westphalians & Saxons; 6mm Moderns, more Air and Naval from WW2 and more recently; SF and Fantasy.  However, storage is an issue - and in fact getting games in at all is an issue, not so much from lack of intent and inclination since I love playing and I feel it is genuinely good for me, but from difficulty in getting time and space for it.  The lack of it has contributed to me feeling at rather a low ebb all round recently, I think.  My hobby has mainly become about organizing toy soldiers and thinking about games rather than much actual painting and playing recently.  The only things I have really got done in the last couple of weeks are some more games of my adaptation of Bob Cordery's air rules from his Developing the Portable Wargame and finished off my 15mm DAK infantry.

It has been my birthday recently and I got a couple of gaming things.  I got the Games Workshop Thorin Oakenshield and Company set which will fill out my fantasy collection nicely, as will the Stargrave Crew box set for my SF stuff.  I got the Gripping Beast Dark Age warriors too, which will be useful for historical and fantasy skirmishes as well.

I am busy this week with two funerals, a work visit and a course but in the margins my aim is to re-establish my painting regime, some research time for scenarios and put in place some measures to get some games on the table.  They will have to be small and portable I think to have any chance of happening, but I do have stuff which fits that bill.  Everything else will have to take a back seat for the moment since the 'real estate' issues around my house aren't going away in the next few months.  So wish me luck!  I am also going to try and get back into club gaming in the next couple of months, which has been quite difficult for me previously.  I am busy until halfway through December but it should be possible after that.  I am local to Nottingham and Mansfield and Newark, so there should be something which suits...

Email ThisBlogThis!Share to TwitterShare to FacebookShare to Pinterest
Labels: Partizan