"It is a truth universally acknowledged that a gamer in possession of a newly painted army must be in want of a decent scenario to do them justice."

So, for my next campaign, I have moved forward (or back) to WW2 and taken on another one of the excellent TooFatLardies' pint-sized campaigns: 29, Let's Go! 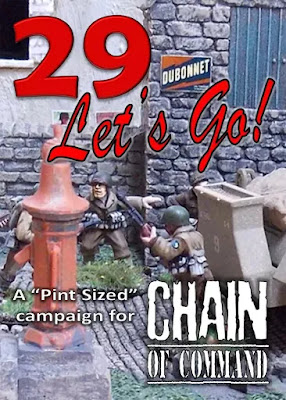 This features the "hard-luck" 29th Infantry Division which suffered so badly on Omaha Beach on D-Day.  This campaign is set just after D-Day, when the 29th is pushing forward towards Isigny.  The 175th Infantry Regiment is aiming to seize and hold this bridge which will allow the linking of the Utah and Omaha beacheads.  Elements of the 352nd Infantry Division are attempting to delay them,  to allow the escape of German forces in the area before blowing up the bridge Isigny.

As usual, I am using the WRG 1925-50 rules which still, for me, do so much right without doing too much wrong, and which play very quickly at this size of game (a reinforced platoon). 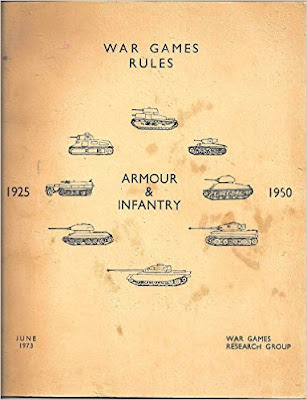 n.b. The 29th apparently managed to get double numbers of BARs issued.  Depending upon how one interprets things, this would justify 2 x LMG teams per squad or ignoring them entirely and just having 3 rifle groups per squad.  This will either be entirely appropriate, a useful simplification or utterly wrong, depending upon your opinion...(recent discussions of these hardy perennials here and here)...

Game Results:
A reasonably text book success for the US platoon.  Helped by having tank support and good bases of fire, and some quite poor German shooting, the US eliminated the main German position in quite short order.  The other Germans were encountered when their morale was already shaky and so they did not put up much resistance, although it at least meant that they could get away cleanly without significant further losses.

Game Notes:
The US were definitely helped by having the extra firepower of two BARs per section, and counting them as LMGs.  They weren't quite as good as the German LMGs, since I allow those a "successive fire" capability: they can fire on successuve targets within 25m of the first target, as long as a hit is achieved.
As usual for these solo WW2 games, I use the "Threat Generation System" from an old issue of Miniature Wargames magazine.  It continues to provide unpredictable, and thus tense, games.  As the active player I do have a systemic advantage in being able to co-ordinate activity better, so each scenario is basically a test of that, but with the proviso that it might end up being trivially easy to win, or impossibly hard, depending on which threats are generated where.

Figures and tanks by Baccus 6mm. Buildings mainly Leven.  The playing area is about 2.5'x1.75' and the game took about 45 minutes or so.